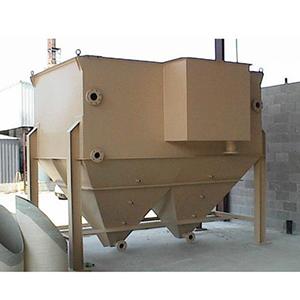 THERE ARE IN BROAD TERMS TWO METHODS OF SEPARATING SOLIDS BY GRAVITY FROM A SLURRY:

The equipment discussed in the Sedimentation/Clarifier section belong to the deep depth sedimentation category and the Lamella Settlers to the shallow depth category. Both are designed to handle suspensions with low concentration slurries and solid particles that exhibit free and independent settling (Stokes law) before they are entering the the hindering zone. In both categories laminar conditions are required to obtain a sharp separation between the settling solids and the liquid so that the upward velocity of the liquid is lower than the settling velocity of the finest solid matter. Since velocity is directly related to surface area the larger the area the better the separation. If the area is too small the upward velocity goes up and a fraction of fine particles will migrate to the surface and report to the overflow so the surface area is a critical factor in sizing. Comparing the two categories the periphery depth of conventional clarifiers have a long sedimentation path of about 2-3 meters whereas the clearance between lamella plates, in analogy to depth, have a short path of 5-10 cm.

The first lamella clarifiers date back to early 1900 consisting of a bundle of tubes and inclined plate lamella settlers were introduced around 1970 and are commonly used in clarification processes such as:

To better understand the operating principle of a Lamella Settler Plant the animation on the left demonstrates two cylinders that are filled with the same suspension with one positioned straight up representing a conventional clarifier and the other  tilted at an angle representing an inclined plate settler. As may be seen in the animation it takes longer for the solids to reach ultimate density on the deep path of a clarifier in comparison to the shallow path of a Lamella Settler.

The Area of a Clarifier vs a Lamella Settler

As mentioned in the introduction gravity settlers are sized on the basis of two parameters, upflow rate of the liquid and settling area, so under equal conditions the effective area for both clarifiers and lamella settlers is the same. On a clarifier the settling area is the tank surface and on lamella settlers it is the total area of the inclined plates projected on a horizontal surface.

This reduces the footprint of lamella settlers by about 90% as compared to clarifiers and consequently less land is required.

The Lamella Settler Plant consists of 4 major compartments positioned along a rectangular settler tank with an inclined backside at a slope of 45-60 degrees.

The slurry enters through the feed inlet and directed down and sideways towards the two plate stack compartments. As the slurry reaches the bottom end of the inclined plates stack it turns upwards and enters between the parallel plates in a laminar flow pattern. Here the free settling solid particles thicken to a sludge that slides down the plates while the gradually clarifying liquid moves up in a counter-current pattern. When the clear liquid reaches the to top of the compartment it flows through orifices that ensure even distribution of the flow across all the lamella plates.

There are applications that flocculation improves the settling rate of the solid particles and produces a clearer liquid by agglomerating fines. In this instance a flash mixer followed by a slow speed mixer may be mounted upstream the settler. The flash mixer brings in immediate contact both the flocculent solution with the incoming liquid to ensure equal dispersion and the slow speed stirrer builds the floc gently to avoid its breakup before entering the settler.

Owing to the small volume of the hopper and the short detention time available for compression the sludge is often dilute and does not reach its ultimate density. In order to increase compression the underflow of the settler flows to a small conventional thickener with raking arms that compacts sludge prior to filtration or disposal to sludge drying beds.

Since there are no moving parts in a Lamella Settler Plant there is practically no necessity for routine maintenance except for cleaning the plates from time to time. This is done by bubbling air through the plate stack and in some cases with the aid of special vibrators.

We offer Lamella Plate Clarifier Pune | Mumbai to achieve solid-liquid separation by directing the liquid between a series of inclined plates called lamella. To its horizontal projection the settling surface of each plate is equivalent. Having up to ten times the clarification area of a conventional circular settling tank stacking the inclined plates results in the separator occupying the same floor space. In other words, for the same liquid flow, the Lamella Plate Clarifier Pune | Mumbai would occupy 1/10th the floor area of a conventional clarifier.

With several cutting-edge options the contrasting conventional methods in clarifier design approaches, the protocols and text establish criteria for decision-making. The Lamella Plate Clarifier Pune | Mumbai is specially structured for possible consumers evaluating clarifier results for specific situations, for vendor’s required demonstrating best design. The Lamella Plate Clarifier Plant Pune is inclusive and effective treatise accessible on wastewater clarification. To approach the technologies and process of confidence It is also exposing explanations will assist everyone, clarity, and understanding. The Lamella Plate Clarifier Plant Pune process is more important and plays the essential factor in the primary treatment of water treatment plant.

For any kind of query, contact us with the details below.

Please fill in your info and we will contact you soon.