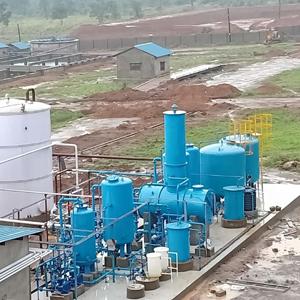 Demineralisation is the process of removing mineral salts from Water by using the ion exchange process. Demineralised Water is Water completely free (or almost) of dissolved minerals. The definition of demineralization is that all the minerals in the water, which consist of positive and negative ions, are removed, leaving pure water (H20) molecules or trace amounts of these ions (Oxford, 2015). The positive ions are defined as cations and may include magnesium, sodium, calcium, iron and copper. The negative ions are referred to as anions and may include chlorides and sulphates. The conductivity of demin water for power generation is typically around 0.055 µS/cm. At this conductivity, it will not conduct energy electrical currents through it.

The main purpose of using demineralised water by Demineralisation Plant in Pune is to prevent the scale formation and oxidation of metals. Therefore they are deaerated and used wherever applicable.

We at Watertech Solution, the best DM Plant Manufacturers in Pune provide Wide range of custom-built DM Water Plant for industrial process water applications, with inherent design to conserve water, and save costs. The unique design of D.M. plant by our DM Plant Manufacturers in Mumbai ensures the maximum utilization of the effective surface area, uniform space and linear velocity across the resin bed which provides effective contact time between water and resin bed, yield salt free water for process equipment where water is being used for further application.

SAC resin is effective for water softening, which removes hardness ions. It has been used in residential, commercial and industrial applications for more than 100 years. Like tiny magnets, SAC resin beads remove scale-forming calcium (Ca2+) and magnesium (Mg2+) ions by exchanging them for sodium ions. Hardness levels are reduced and sodium levels are increased.

All resin has a finite exchange capacity. Individual exchange sites on the resin beads will eventually become full and incapable of exchanging further hardness, so the resin must be recharged. Since SAC resin beads have a higher affinity for calcium/magnesium ions than sodium ions, a concentrated solution of sodium chloride brine (typically 8 to 12 percent) is used to force accumulated hardness ions off the resin beads.

Weak acid cation (WAC) resin can remove hardness and alkalinity simultaneously. It also provides some degree of total dissolved solids (TDS) removal. Generally, WAC resin removes about 80 percent of the temporary hardness (hardness associated with dissolved bicarbonate minerals). TDS are reduced by about 17.1 parts per million (ppm) for each grain of hardness removed. Since WAC resin exchanges hardness and alkalinity ions for hydrogen ions, the treated water will be acidic (or lower pH). The degree to which TDS are reduced and pH lowered largely depends on the incoming hardness levels.

SAC and SBA resins employed in combination either individually or mixed together can be used to reduce minerals and TDS in water. Minerals in the water are exchanged with hydrogen cations (H+) and hydroxide anions (OH–) from the resin beads to form highly purified water (H2O).

There are two general types of ion exchange resins: those that exchange positive ions, called cation exchange resins, and those that exchange negative ions, called anion exchange resins. A cation is an ion with a positive charge. Common cations include Ca+2, Mg+2, Fe+2, and H+1. A cation resin is one that exchanges positive ions. An anion is an ion with a negative charge. Common anions include Cl-1, SO4-2, and OH-1. An anion resin is one that exchanges negative ions. Chemically, both types are similar and belong to a group of compounds called polymers, which are extremely large molecules that are formed by the combination of many molecules of one or two compounds in a repeating structure that produces long chains. A demineralizer is a vessel, usually with a volume of several cubic feet that contains the resin.

Depending upon Demineralization Plant in Pune of and DI water output, resin, becomes exhausted and does not capable to deionize. Their power of removing ionic materials reduces and active ion concentration reaches a low level. The process of restoring their power or enhancing active ion concentration level is called regeneration. In this process exhausted cation and anion are recharged with Hydrogen H and OH ions.

Demineralisation by Demineralization Plant in Pune is the process of removing mineral salts from water by using the ion exchange process. It is possible to use Demineralisation with most natural water sources and produce water of a higher quality than conventional distillation. De-mineralization technology by DM Plant Manufacturers is the proven process for treatment of Water. A Watertech Solution, the best DM Plant Manufacturers produces mineral free Water by operating on the principles of ion exchange, Degasification, and polishing.

Watertech Solution is one of the best DM Plant Manufacturers in Pune has a Wide range of custom-built devices for industrial process water applications, with inherent design to conserve water, and save costs. The DM Plants and DM Plant Manufacturers are made such devices which is manually operated or fully Automatic, & ready to install & are available as standard models or custom built DM Plant for specific needs. Watertech Solution Demineralization Plant in Pune finds wide application in the field of steam, power, process, and cooling.

For any kind of query, contact us with the details below.

Please fill in your info and we will contact you soon.